Comparing The Anycubic Photon and the Elegoo Mars

If you’re interested in 3D printing, you’ve undoubtedly heard about these two gems at least once. Since the Elegoo Mars is still relatively new, you might be wondering what all the buzz is about and which is better: Elegoo Mars or Anycubic Photon.

The Elegoo Mars is the most cost-effective. However, in terms of precision and detail in the finished product, Anycubic Photon easily outshines the Elegoo Mars. These two are incredible printers with many potentials, and they’re well worth the money.

However, if you’re comparing them, they have several distinct differences. Before you pick a 3D printer, it’s a good idea to conduct thorough research and figure out what you want.

Continue reading for an in-depth comparison of the Anycubic Photon vs. Elegoo Mars. 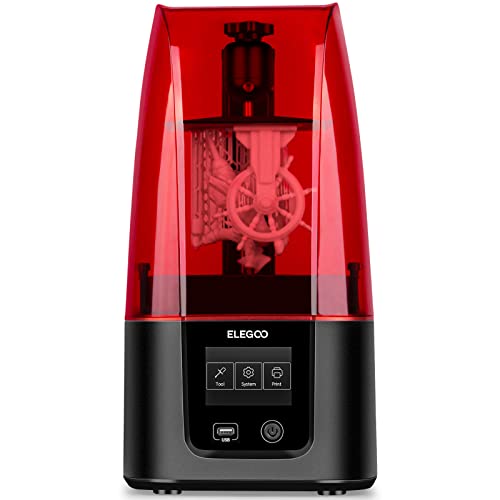 The Elegoo Mars is a simple 3D printing system that’s perfect for beginners. It has a good price, and one can easily get consistent prints, top-notch performance, and minimal effort.

The Elegoo Mars is a 3D printer that utilizes masked stereolithography instead of the time-consuming fused deposition technique used by other 3D printers.

Resin printers aren’t for everyone. The cleanup procedure might be a little messy. It entails washing completed pieces in ethanol to cure them, as well as cleaning every build plate. Furthermore, the odor of resin is powerful- and there are toxicity issues. But, it’s also the simplest to use.

Its build plate moves a layer instead of two axes that move simultaneously, resulting in far less noise, making the process easier to manage and maintain.

It won’t fall or rock even when you move it forward, so it’s easier to use the printer for non-commercial activities without fear.

There’s a removable cover that might be inconvenient. To get to the print vat and resin, you must altogether remove the lid.

Once the cover is removed, you have full access to the resin tank. This printer’s removal of prints is considerably simpler.

It features full instructions in the box, but they are not required. Simply loosen the two screws, drop the plate inside the bottom, the level it. The setup takes around 2 minutes.

The printer does not include resin, but it is compatible with 405nm ultraviolet-sensitive resins. There is also has a variety of customization choices that you may purchase. Even with the standard settings without optimization, resin printing is considerably easier than the traditional filament. If you want to tinker with its settings, you may change the layer heights, and it won’t cause problems right away.

It’s simple to use, making it ideal for starters. The program adds to the enjoyment of using it even more. 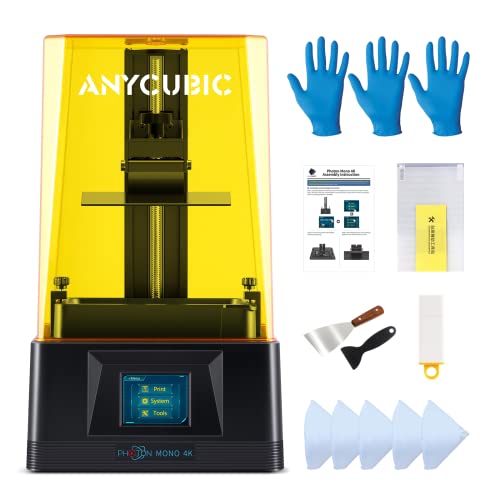 Anycubic’s Photon is a great all-around printer. It produces excellent quality of prints, and using it is quite easy. It offers everything that the FDM printer does at a lower price. It comprises a few learning curves, but they’re nothing compared to the benefits you’ll get.

The Anycubic Photon 3D printer uses liquid UV resins instead of filament to create 3D objects. The DLP process involves curing the entire picture of the print job with light for each layer, known as Digital Light Processing (DLP).

After curing the resin, a build plate rises to accommodate it, and then the printer prints. One advantage of this technique is that it produces a very high accuracy level and complexity. The resolution of Photon on the screen is 2K, making it fantastic for its budget price range.

Fortunately, the whole machine is completely built. Everything you require, like a printer, resin tank, power cable, owner’s manual, gloves and maks, resin, and many more.

The Anycubic Photon comes already pre-assembled with its build plate, resin, and several sliced models to try. The Elegoo Mars already beats it out since it comes fully built, including a build plate, including resin, and providing you with some test models.

To begin, use the test print available on your USB stick. Besides, a lattice cube that it comes with is a fantastic method to show how Anycubic Photon performs. With its many intricate layers, it can allow you to predict better how your prints will come out.

You don’t have to learn the program just yet because its design has already been uploaded and sliced. It’s a fantastic approach to go step by step, making certain the print jobs stay on track. If they don’t stick, you may require to re-level it then print again.

The finished item has a smooth, detailed surface with excellent printing quality. After cleaning, you’ll have a sturdy print with a flawless outside.

Simple designs appear to be nearly layered, which is a good indication of superior quality. Complex jobs may need a few extra support structures; however, you can make them automatically and chop them off afterward. You may snip these supporting structures off once the job is completed with no effort at all.

If you have been considering purchasing the best resin printer but don’t know which one to get, the Elegoo Mars is an excellent choice. You won’t lose money by investing in this printer, and it will print just as well as some of the more expensive ones.

The Anycubic Photon needs a little more effort to level it and ensure prints adhere to its bed. After mastering it, you’ll be able to produce high-quality work.